Just arrived home yesterday from my week in Wellington and spent the day catching up on the sleep I did not get on my 6am flight home/staying up all night to make sure I didn’t miss my flight.

Wellington was a surprisingly nice city, a little bit like another Australian city but with funnier accents and kiwi birds on everything. It definitely is much quieter than Melbourne, there was hardly anything open on Sunday, so a bit like Melbourne’s quieter cousin with terribly gloomy weather.

Speaking of the weather, the constant drizzle and harsh winds simultaneously drenched my hair while sucking all the moisture out of my hands, making going out rather miserable at times. For anyone planning to visit Wellington a poncho or raincoat is a must – umbrellas are generally useless once blown inside out. However, one upside to Wellington weather was its stability. Compared to the four seasons one might experience on a typical Melbourne day, in Wellington you generally could wear the same thing throughout the without worrying about the weather being anything but miserable – no surprise sunshine or hail.

On to tourist-y things I managed to do whilst not debating.

On my first full day in Wellington, I had the pleasure of taking a rather steep tram trip on the cable car with my Australs team (Melb 5 <3). It’s a rather anti-climactic 5 minute ride up to the Botanic Gardens, Cable Car Museum and Carter Observatory. Although I didn’t get a chance to actually go into the Carter Observatory, it looked really awesome. I would definitely recommend visiting the Botanic Gardens for a leisurely stroll and picnic, and the Cable Car Museum for a bit of history and photos on the old cable car.

Te papa, New Zealand’s National Museum was definitely one of the highlights of my trip. Saw the 495kg Colossal Squid, pretty gross but imagine how many calamari rings it could have made. I loved the Maori culture exhibits the most though. Both the permanent exhibit which houses various Maori artefacts and carved structures and the temporary exhibition “Kahu Ora | Living Cloaks” were extremely interesting, even if it was a little bit creepy at times, given what the Maori carvings and totems look like in the dark – that is like monsters D:

On a side note, the level of integration and visibility of the Maori populations in New Zealand really puts all of Australia’s token gestures to shame. The exhibits and Maori translations and all the signs in both English and Maori don’t feel obligatory or forced at all compared to in Australia. Granted there are over 200 indigenous Aboriginal languages in Australia, but the fact that I couldn’t remember whether Melbourne Museum has Aboriginal exhibits or not is probably is rather telling.

Lastly, and most importantly, on to food and a bit of shopping!
Cuba Street is definitely where it’s at in my opinion. Described as the “beating heart of Wellington Bohemia” (Thanks Australs guide), it has awesome array of cafes and boutique stores with a similar feel to Melbourne’s lane ways. Although I had no money to go shopping, I came across heaps of awesome looking vintage stores, op-shops around Cuba Street, though it gets more boring and chain store-like the further up towards Lambton Quay you go – i.e. Country Road, Cue, Glassons etc.

The best cafes and eateries were definitely those serving South American cuisine, which is often difficult to find at a decent price in Melbourne.
For around $15AUD, you can get a decent, filling lunch or dinner of Mexican, Spanish or Caribbean food, excluding drinks but hey, the same meal in Melbourne would probably cost about double that at a restaurant like Mamasita or Movida.

‘Fidels Cafe‘ for brunch – the hash was amazing;
‘The Carribean‘ for Jamaican-style sweet breakfast or savoury lunch – Gingery Mango sauce is the best;
‘Viva Mexico!’ for cheap, quick Mexican food – go for tacos or the breakfast menu & skip the quesadillas or enchiladas;
‘The Flying Burrito Brothers’ for dinner and drinks – a classier restaurant version of Viva Mexico, with a more extensive menu and largely non-negotiable need for bookings unless you get in early 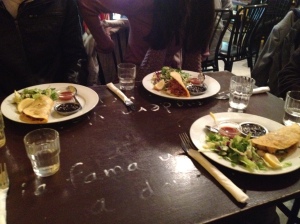 Only warning about the food is that it’s generally varying degrees of spicy but luckily I love spicy food unlike a certain someone’s stomach, which reacted rather violently to some rather overzealous pepper saucing of dinner, causing us to wander Wellington for a good 10 minutes in search of a public toilet and then almost miss the Women’s debate at parliament. The moral of this story, no matter how great the green pepper sauce tastes, use in moderation.

Also avoid ‘Osteria del Toro’ even though it’s in almost every tourist guide – my first proper meal in Wellington with Jessie was frankly over-priced and a real let down considering the 25 minute wait and raving online reviews. The squid-ink paella was definitely the most interesting dish of the night but lacked a certain ‘kick’ that I was hoping for given the price. Dinner came to almost $70NZD between two people compared to about $40NZD other nights for much more satisfying food. 😦 Maybe we just ordered the wrong food…

Overall, to my surprise, Wellington really grew on me and I think I’d really like to visit again, maybe as part of a longer trip around New Zealand one day, when I can drive so I don’t have to be stuck walking up the ridiculous hills (yes, I’m looking at you, Victoria University on the steepest mountain ever) in the terrible weather.

One Year Ago Today →
Join 1,301 other followers